Hi, don't know if this is going to work. Just thought I could write down a few hints on Boom Beach (the way I see it ... of course feel free to comment stuff)
This post is going to grow over the next weeks ...

Reversal is also an option, he is slightly nearer people's level

Great info Bernd.....thanks for posting all of it. 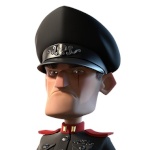